My son’s love of LEGOS started at an early age.  He loves the process of following step by step directions and watching the final creation come together as a whole.  Every year I get him a LEGO book so that he has new things to build without having to buy any new sets.  Even though he’s 12, he still really enjoys building when he has some down time which isn’t as often these days! This year he’ll be receiving How to Build Brick TV & Movie Cars by Peter Blackert which includes step-by-step instructions for 15 fun builds for a range of levels featuring the most famous rides from the big and small screens, including:

The directions look like this.  Very similar to the booklets that come with actual LEGO sets.  These instructions are for the foundation of Kit from Knight Rider. 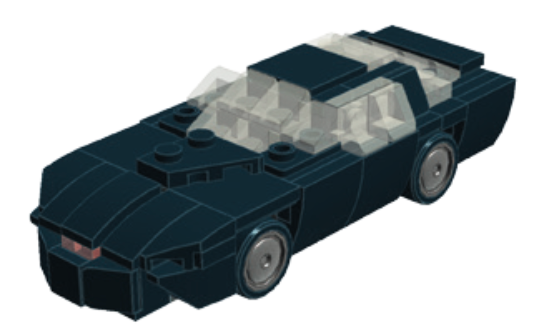 The final build looks like this.  Each build has info about the car, which TV/Film it was in etc.  This is pretty cool because I am sure my son won’t be very familiar with most of these since most are before his time.

The author, Peter Blackert has built thousands of LEGO cars over the years using his experience as a Powertrain & Chassis Systems Engineer Architect for the Ford Motor Company.  His work has been featured regularly in articles on LEGO fan sites and car-club magazines.  His Bugatti Veyron  was listed at #5 in TopGear Magazine’s “Ten Greatest Replica LEGO Cars” in 2014.

This is a really cool book for any LEGO fan or car lover.  It will be released on October 15 but you can pre-order a copy now on Amazon.

Complimentary product was provided for this review, however, all opinions expressed are my own.  I was not compensated in any other way.  See Mommies With Cents disclosure policy for more details.

Feeling lucky? Enter to win a copy of How to Build Brick TV & Movie Cars by filling out the form below. Also, be sure to check out all of our other giveaways. NOTE: If you don’t leave your address, I won’t have a way to get your prize to you. If you need more guidance filling out this form, you can watch this video on how to enter Rafflecopter giveaways.