This post may contain affiliate links. Mommies with Cents receives free products for review purposes and may sometimes be compensated for posts but all opinions expressed are 100% my own. See Mommies With Cents disclosure policy for more details.

When Maleficent was in theaters I wanted to see it really bad.  Unfortunately I never made it.  I was super excited to get a Blu-Ray copy in my hot little hands before it comes out on November 4th.  My kids and I cuddled up on the LoveSac last week and watched it for the first time on our own big screen.  Several aspects of the movie surprised me.  I don’t want to give anything away to those who haven’t seen it yet but the movie wasn’t nearly as “dark” as I expected it to be and while I loved Angelina Jolie in the role of Maleficent, she wasn’t nearly as evil as I imagined she would be.  Perhaps that’s because I didn’t really know the story behind the movie.

My kids watched it twice in one day if that means anything to you.  After that, I loaned it to a friend and her family watched it several times over a few days.  Our kids our roughly the same age, my 7 year old being the oldest and her 3 year old being the youngest.  It wasn’t too scary for any of them.

Maleficent is one of Disney’s most iconic villains first appearing in Sleeping Beauty.  In this film you’ll explore her untold story as Academy Award winning actress Angelina Jolie grips your attention.  After a neighboring kingdom threaten’s her forest she places a curse on the King’s newborn baby daughter, Princess Aurora.  To protect her from the curse, the king sends the baby off into the forest with 3 fairies to take care of her.  Over time, Maleficent grows attached to the girl and tries to undo the curse but even she can’t break it.  It must be broken by true love’s kiss.  This fantasy is a must-see, especially for Disney fans.  Pick up your copy beginning November 4th!

Download some free Maleficent activities by clicking on the image below: 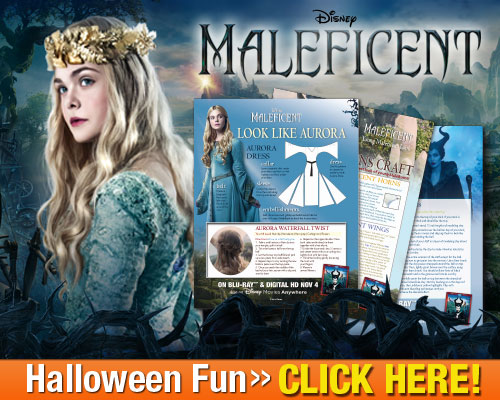