**This giveaway has ended. Be sure to check out our other giveaways HERE.** 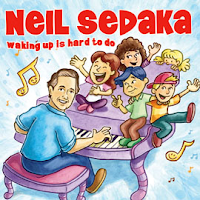 The legendary singer/songwriter Neil Sedaka is set to release his first ever children’s album on Razor & Tie Entertainment on January 6th, 2009. WAKING UP IS HARD TO DO, which also includes a coloring book, is a collection of classic Neil Sedaka hits that have been reinvented as children’s songs. The album brings Sedaka into the world of children’s music, a genre he has not taken on before. In its first week of release this album of hits entered the Billboard Top 200 Album chart at #22, marking Sedaka’s first return to the charts in 27 years.

Sedaka has been inducted into the Songwriter’s Hall of Fame, has had a street named after him in his hometown of Brooklyn, and was given a star on the Hollywood Walk of Fame. He was recently honored with a tribute at Avery Fisher Hall at New York’s Lincoln Center.

This is a really cute CD and my daughter was shaking her booty the whole time!!! I am going to move it to the car so that it breaks up our drives some. It has some great hits that are re-written so the tunes are recognizable! Definitely check out the CD!

WAKING UP IS HARD TO DO track listing:

Waking Up Is Hard To Do
Dinosaur Pet
Where The Toys Are
Lunch Will Keep Us Together
Happy Birthday Number Three
Laughter In The Rain
Rubber Duckie
Is This The Way To Cross The Street?
Little Devil
I Go Ape
Baby’s First Christmas Lullabye

Feeling Lucky? Read how to enter the giveaway below.